To me, this event’s charm lay in its localness. Unlike large-scale events such as Gion Matsuri which were heavily marketed towards foreigners, this event was meant for locals. As such, it was a precious experience for me.

To start with, what was a Darumaichi?

It was an annual Japanese traditional event held in December. To put it simply, it was a festival meant for the sale of Daruma. In the Iizumi Kannon Darumaichi in Odawara which I visited, there were also plenty of yatai booths which sold food, snacks, and toys in addition to the Daruma booths. 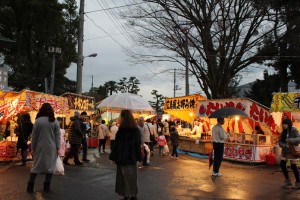 Daruma were lucky charms for the Japanese. They represented the spirit of persistence, as they would get right back up after falling down. It was a Japanese tradition to buy one at the end of each year and burn old ones in a “Pūjā” ritual. 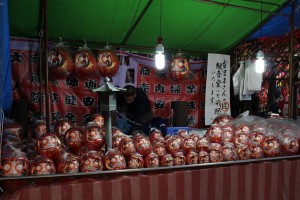 The order of painting the eyes depended on the type of wish to be fulfilled, but generally one would start from the left eye. One would paint the eye while strongly wishing for some new year resolution, place the Daruma on an altar, and paint the other eye when the resolution was finally achieved. As one would see the one-eyed Daruma every day, he or she would be constantly reminded of the resolution until the day it came true.

This “eye opening” ceremony, represented enlightenment. It could be done by oneself or by a monk. 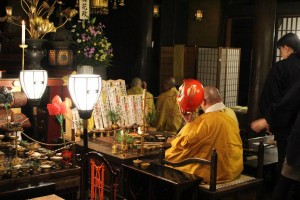 For every daruma sold, the shop staff would clap their hands cheer in a special rhythmical way. This was to bring forward good luck.

Whether the new year resolution was achieved or not, old Daruma would be burnt at the nearest Dondo bonfire in a ritual known as Pūjā. Pūjā is a prayer ritual performed by Hindus to host, honour and worship one or more deities, or to spiritually celebrate an event. 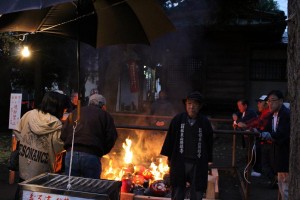 I hope everyone who read this has gained new insight into Daruma and their significance to Japanese folks. If you visit Japan, why not consider getting some Daruma as souvenir?