Today my boss kindly took me for a drive through half of Izu peninsula to explore places which would otherwise be infeasible to visit.

I visited the below places.

Jogasaki Coast was a popular hiking trail in Ito, known for its rock cliffs formed from lava erupted from Mount Amagi range long ago. Mount Amagi range was a range of mountains that formed the border between Izu and Higaashi-Izu city.

The trail was a very long stretch of road along the east coast of Izu peninsula. The trail came in two parts, the picnical course and the nature research course. Most tourists went for the former, as it was shorter (3 km) and included both the Kadowaki lighthouse and suspension bridge. The latter was 9 km, which meant only the fittest could complete the entire course.

The picnical course had two famous landmarks, Kadowaki lighthouse and Kadowaki suspension bridge. As I came here directly by car, I skipped most of the walking and went right for these two landmarks. 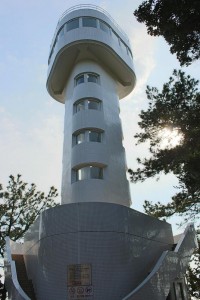 First, the lighthouse. The lighthouse was 24.9 meters high but the highest observation deck was only at 17 meters. From there you could get a good view of the deep blue sea. Some photos of the cape at the foot of the lighthouse. A short walk brought me to the suspension bridge. Even though it was a weekday there were plenty of people here. They were mostly Japanese locals. And here were photos taken from and of the bridge. Next was Cape Tsumekizaki. My visit here was mainly for the daffodil fields, however the cape was so scenic that I couldn’t help snapping photos after photos. First, the daffodils. 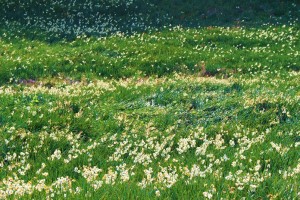 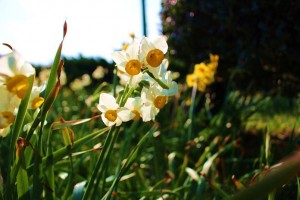 Other than daffodils, there were also camellia and this other plant I couldn’t name. 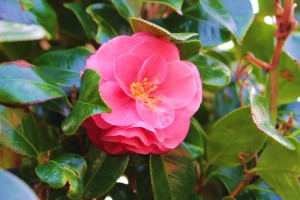 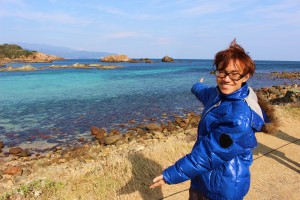 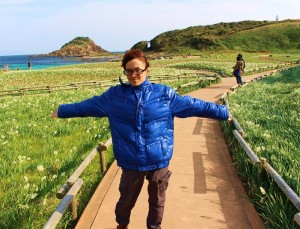 And at the tip of the cape was this lighthouse. Watching the endless blue sky and ocean made me forget about my silly worries. This ought to be a great spot to watch the sunset. After this, I had Kinmedai (English name : Splendid Alfonsino) for lunch. Kinmedai meant golden-eyed sea bream, and from the below photo you would immediately see why it was named that way. 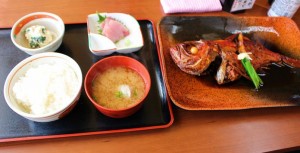 Kinmedai was a fish harvested and sold within the Izu peninsula, so you could find quite easily in the region.

For a set meal of one whole fish, it wasn’t too expensive. The Kinmedai had tender flesh and it went perfectly well with the sauce they used. Visitors to Izu should definitely try Kinmedai at least once.

The last stop was a wild monkey park. This wasn’t actually a park. It was just a coast between mountains where monkeys lived.

Upon the purchase of a ticket, a staff would drive you down to the coast.

Once down at the coast, another staff would summon the monkeys from the mountain by making noise with some tools. The monkeys knew that noise meant it was feeding time. 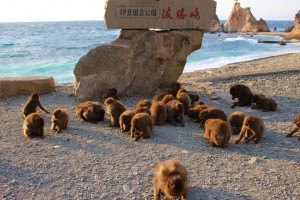 This park was interesting in various ways. If you chose to look beyond the surface, you could see that the monkey society operated by a dog-eat-dog rule that dictated the animal kingdom. Bigger monkeys would snatch food from smaller ones mercilessly. Feeding the monkeys could only be done from indoors through metal bars due to safety reasons. These monkeys would get quite violent for food. 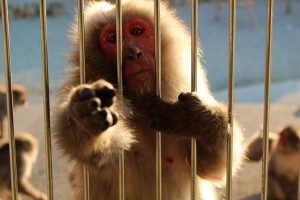 This photo speaks many words.

On the way home, I drove past a beautiful rapeseed field. 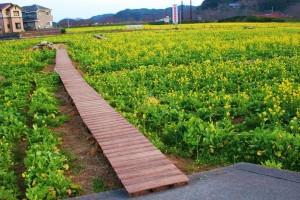 And finally, I watched the sunset beyond the horizon as my boss drove me home. It was a long and tiring day, but I was able to see many things I could not in my own country. Those who drive, do give this itinerary a shot.