Do you know Hatsumode? It is a new year tradition of Japan, “Hatsu” means “for the first time” while “Mode” means “praying in a shrine or temple.” So Hatsumode basically means to visit shrines or temples for the first time in the new year. In this post, I would like to share some basic knowledges about how to perform Hatsumode in Japan!

This year, I went to Tsurugaoka Hachimangu Shrine which is located in Kamakura City. 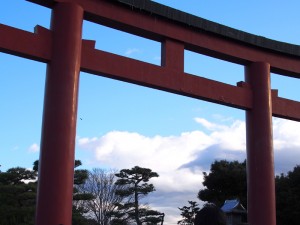 I went to there at 9 am on January 1st, the shrine was already packed with numerous people. It took me about one hour to reach the praying spot. However I had got used to this crowdedness since it occurs every year. 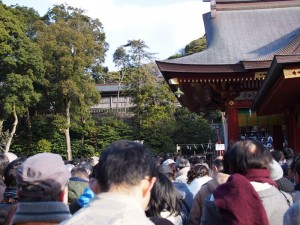 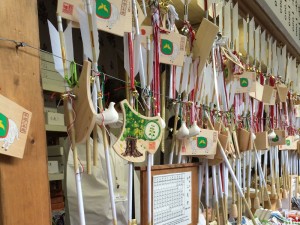 To me, this year is a “Yakudoshi” which means an unlucky year. So I had to go though a ritual called Yakubarai to get rid of the bad luck.

Yakudoshi is a set of believed “unlucky” ages in Japan. To make it worse, my age for this year is “Honaku” which is considered the most bad luck age in Yakudoshi! ! ^^; 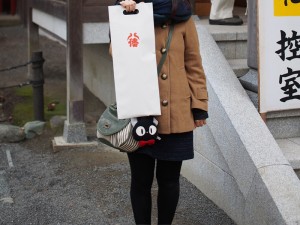 Therefore I applied for a Yakubarai ritual to get rid of the bad luck. The ritual is expensive, it cost me a fare amount of money.

The space within the main building of the shrine was so narrow, I waited for another two hours and finally went through a Yakubarasi ritual. I hope it can help me go though this year in peace and without any hassle.

After prayer, you will receive an Osatsu (a type of talisman) and an Omamori (an amulet).

It was put in a cute paper bag.

Later I went to pick an Omikuji (a fortune slip of Shinto).

Omikuji only cost 100 yen each, which is a resealable price. Don’t forget to try one if you got a chance to visit a Japanese shrine! To me, the fortune of this year is goes to be… 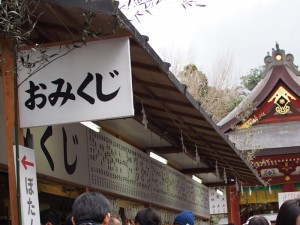 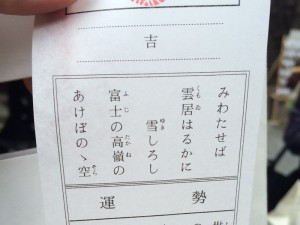 I am not sure I understood everything written in the Omikuji. However it says I have to be “more sensitive and creative.”

There is another luck charms called Hamaya (a Shinto arrow) which is believed can drive away bad lucks.

The Hamaya arrow sold at Tsurugaoka Hachimangu Shrine of Kamakura is a well-know item to the visitors.

At the end of my trip, I went to Toshimaya which is a shop well-know for its Dove Sables, a Kamakura souvenirs. I bought a Fukubukuro, a grab bag contains a variety of articles supposedly worth more in total than the purchase price.

I was so happy to see It contains a notepad, a clipper and other useful items, and a box of tasty Dove Sables! ^ ^