Hello again everyone. It’s been a while.

Today I visited, Nirayama Reverberatory Furnace, a UNESCO world cultural heritage site. It was only recently in July 2015 registered as one of the eight “Sites of Japan’s Meiji Industrial Revolution: Iron and Steel, Shipbuilding and Coal Mining”, which collectively counted as one world heritage.

From Izu-nagaoka station to the reverberatory furnace was a 20 minutes’ walk. There would be buses to ride in the weekend, but on weekdays you had to either walk or take a taxi for 850 yen.

If you chose to walk, it would be a long but straight path. There would be no worries of losing your way. There were plenty of farms and greenhouses along the path. The surroundings were quiet and peaceful, as you would expect of a rural area. Also, as there were no tall buildings around, you could have a a clear view of Mt. Fuji. 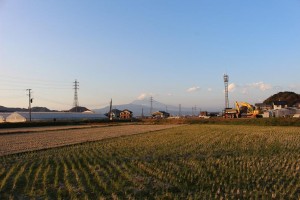 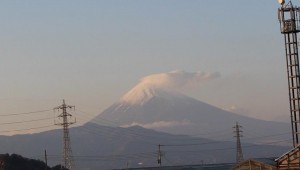 Here’s a short history of the Nirayama Reverberatory Furnace.

“In year 1840, Following the Opium war of 1840, Japan faced the urgent need to strengthen its military power to compete against the West. Egawa Hidetatsu, a retainer of the Tokugawa Shogunate and who governed Nirayama, was acquainted with Western studies and proposed a national coastal defence strategy to the feudal government. His proposals contained a wide range of action, including the introduction of Western-style gunnery and production of Western-style iron cannon, construction of coastal batteries, the foundation of a navy with Western ships and an army system to include farmers trained in the Western method. In these proposals, a reverberatory furnace was a requirement for casting iron cannon. The Tokugawa government decided to build its own reverberatory furnace in Nirayama in response to the arrival of Perry’s “Black Ships” in 1853.

Construction began in Izu-Shimoda in 1853. However, in the following year Perry’s US Black Ships were anchored off the coast of Izu-Shimoda and sailors broke into the construction site. Hence, the Tokugawa government changed the location to Izu-Nirayama. Although Hidetatsu died in 1855, his son, Hidetoshi, followed his father’s footsteps and completed the furnace in 1857.

In 1857, during construction of the reverberatory furnace, engineers of Saga domain were invited to give technical support in order to complete the North furnace. This illustrates how technical knowledge and experience to construct such furnaces was transmitted from Saga to other regions. The other domains, such as Saga and Satsuma, built reverberatory furnace across Japan in the last years of the Edo Era. However, most of them were lost in the course of time, and the ones in Hagi and Nirayama are the only existing substantial remains of such furnaces today. Particularly, Nirayama Reverberatory Furnaces is known because it is such an outstanding and comparatively complete example and was in actual use to cast cannon.

After the Meiji Restoration, the Nirayama site was managed by the Army, which incorporated its associated facilities. Hence, only the main structure of the reverberatory furnaces survives. The Army conducted repair and conservation in 1908. Then, large-scale conservatiuon, in 1957 and from 1985-1989, has been carried out to reinforce the seismic adequacy and to prevent structural weathering.”

Above excerpt taken from http://www.kyuyama.jp/kyushuyamaguchi/ky_shizuoka_01.html

All these detailed information couldn’t be found on the information boards around the reverberatory furnace, so be sure to grab a pamphlet or get a tour guide to explain things for you. 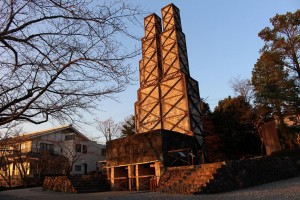 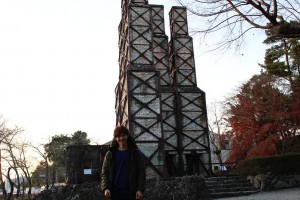 A beautiful moment of the setting sun peaking through the two reverberatory furnaces. Looking at them this way, I could truly feel their historical significance. There were plenty of nitty gritty explanations of the structure and principles of the reverberatory furnaces. Let’s just say I wasn’t quite smart enough to understand them. There was even a replication of a cannon casted by the reverberatory furnaces. There was a bronze statue of Egawa Hidetatsu in front of the souvenir shop, as well as an event space. 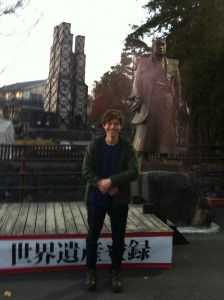 Everywhere in the shop you could see “Tetsuzaemon”, the mascot character of the reverberatory furnaces. Like Egawa Hidetatsu, he wore a hakama and had two katana sheathed at his waist. 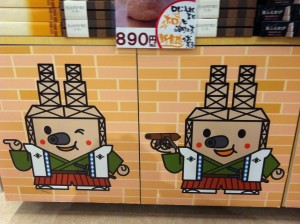 I had thought this since long ago, but Japanese people were really capable of making anything under the sun cute. Reverberatory furnaces? No problem. Really got to tip your hat to them.

Some final thoughts : The Nirayama Reverberatory Furnaces should be a worthwhile visit for Japanese history enthusiasts. Even though I was also one such person, I came a bit too late (4 pm) and missed the guides. In the end I had to rely solely on the pamphlet, which was a pity. Do go early if you plan to visit, and make good use of the guides’ services.