Osechi cuisine is a kind of traditional Japanese New Year foods eaten during new year holidays. It can be simply called “Osechi”. 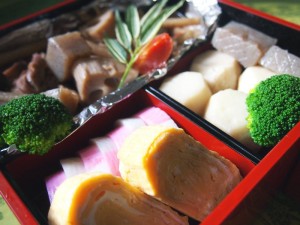 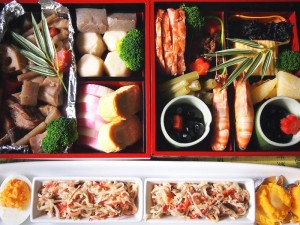 On the first day of 2015, I was invited to the home of my boss. At there, I ate rice cake soup and Osechi. It taste much different from Chinese new year cuisine.

Chinese new year cuisine are mainly hot dishes, people eating in a lively and joyous mood. The cuisine includes many must-have dishes using a variety of ingredients, such as chicken, duck, fish and pork, cooked using different methods such as fired, boiled or sauted. In rural areas, people butchers pigs they raised in the past year to serve a good new year dinner for the guests. Housewives are the most busy ones on this day.

New year in Japan seems a lot more quiet and modest comparing to China. All dishes except a traditional soup called Ozoni, are cooked without fire, there are no hot dishes served at the table. Housewives in Japan are released from doing any houseworks on this day. The main dishes of Osechi cuisine is called Iwaisanko which contains mainly three kinds of dishes, boiled, pickled and fried foods. However the ingredients varies slightly according to different areas in Japan.

In Kanto area of Japan, Iwaisanko contains black soybeans which means longevity and health, herring roes which means the thrive of descendants, and small dried sardines fish which means a good harvest.

The wife of my boss prepared a large amount of Ozoni soup which I ate a lot. I didn’t eat too much of dishes of Osechi, now when I look at these pictures, it triggers my appetite. The Osechi cuisines mainly taste saltier or sweeter than the ordinary foods. There are many foods made in roll shapes in red, yellow and green colors which I have no idea what they are. I will definitely try these delicious foods next time.

The containers used to serve the Osechi cuisine are delicately designed and chose. It must be a box with two to five tiers. Box with five tiers are most formally used. The contents of each tiers also need to be well organized.

The Osechi dishes served in the house of my boss. These are the picture of Osechi cuisine I collected from the web and my friend send to me. 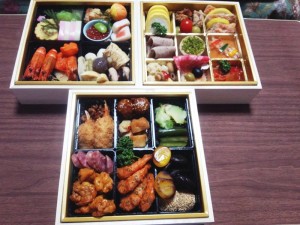 The Ozoni soup is delicious! It contains a variety of ingredients such as vegetables, chickens and rice cakes. The cooking methods and ingredients varies in different areas. 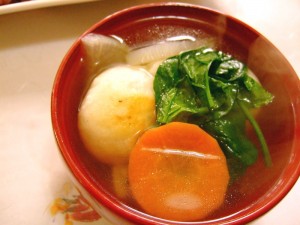 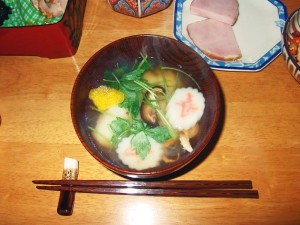 When I left my boss’ house, it started to snow, I was so exited to see snowflakes flying in the sky.

I had a feeling that this year is going to be a good one. 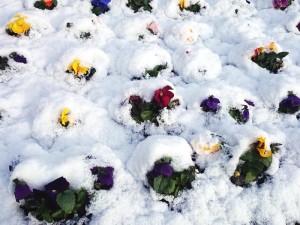 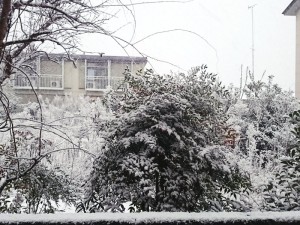