Challenge yourself in this unique traditional Japanese festival!

Tarai-nori-kyōsō is a festival held every first Sunday of July at Itō, Shizuoka Prefecture. The participants will paddle wooden bath tub down the Matsukawa river from Ideyu Bridge until Fuji no Kaijou Yoko (approximately 400 meter)! 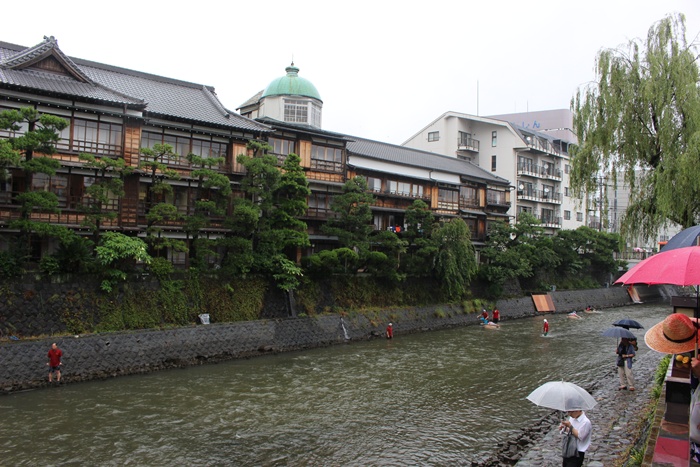 The whole race divided into 5 types of race which is kids race, team race, international race, tourist race, and common individual race. Common race is the race for Japanese people, they came from many places. Near places like Shizuoka or Kanagawa prefecture, or farther place such as from Tokyo or even Chiba prefecture! Tourist race is for people who spend night(s) at local ryokan (Japanese style hotel). The participant of this race will wear yukata (kimono for summer) or happi from the ryokan where they stay while racing.

International race is the race for foreigners and I compete in this race too. Kids race were the cutest! Little kids try to paddle that wooden tub with all their power!! o(〃 ＾▽＾〃)o 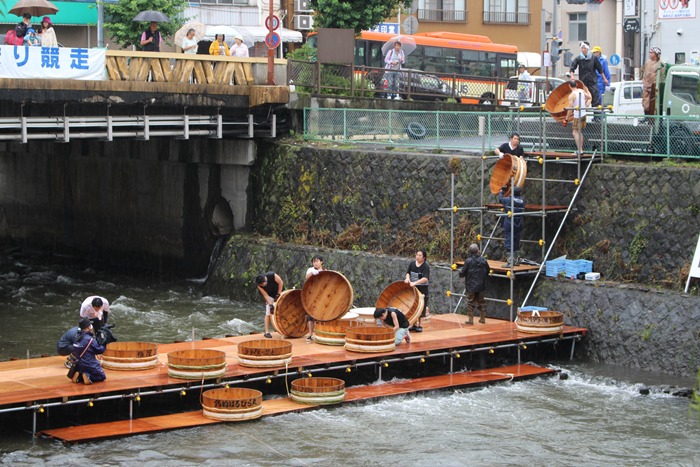 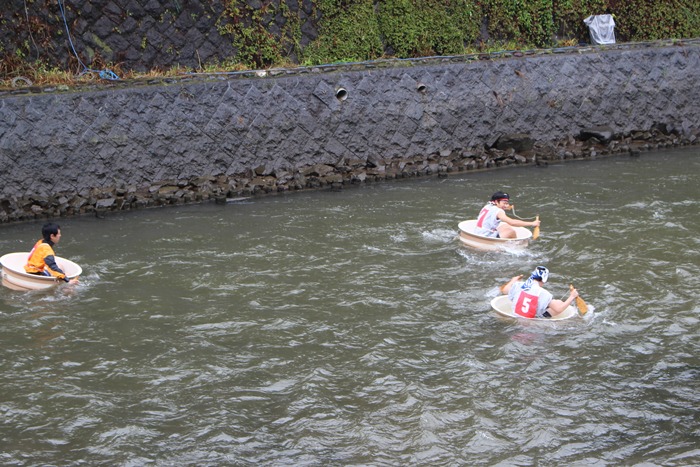 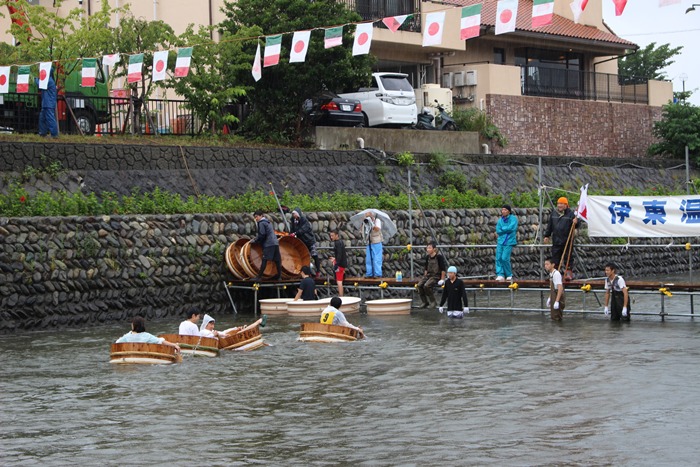 If posible, people who participate in Tarai race are expected to wear unique costume. (That is why I also wearing my costumes!) For this reason, group race is probably the most interesting to watch! Many groups dressed up as flashy and unique as they can. Skeleton costume, maid costume, Yokai watch costume, big afro wig and many more!

Group race were also interesting because not only you have to maintain your own balance, you need to synchronize it with your group member too. Can you imagine if  one of their wooden tub flipped over? (◎v◎) 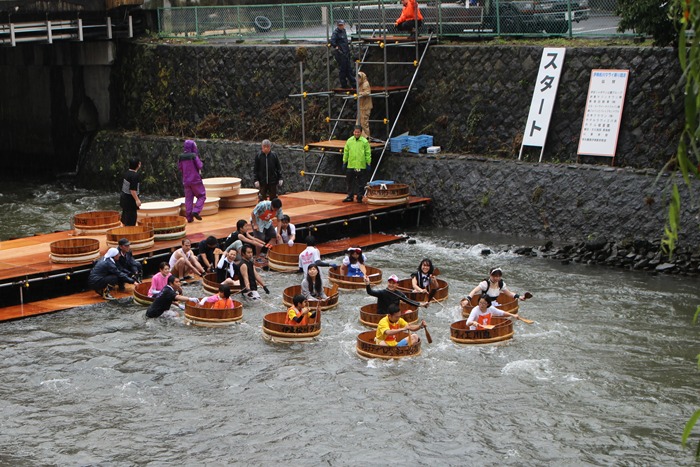 It was my first time participate in Tarai race and I was very nervous! What if I lose? What if my tub flipped over? But most important, its been raining lately, what if the race get cancelled?! Luckily, the race was not cancelled. The river was still safe for the race to be held!

My friend and I were very eager and enthusiast for this event because we already prepared special costume! My friend made a kunoichi (female ninja) costume for me with her amazing sewing skill and lend me her cosplay wig too. To complete my look I also wore tabi (Japanese traditional shoes) which I also wore when Matsubara Shrine Omikoshi Procession. It was five people per each race. I aapply for international race and there were also many other foreigner participants from USA, Germany, France, etc. Under the cold rain we prepared ourselves for the race.

….and the starting command was fired!!!

The men holding our tub let go, and we start paddling. I try to paddle with all my strength and I was…. VERY SLOW! Hahahaha. I tried my best to paddle and also maintain my balance but for some unknown reason my tub kept turned around and I need to turned it back to the front so I can start paddle again. Despite being the last in the race, some spectators encourage me from the riverside and shout “ganbare!!” (fighting!!) and it made me happy. I finally reached the finish line!!I might lost the competition but this experience was so amazing and I am glad to participated. If I can come to Japan, I want to participate in this race again! Here is last photo of me soaked after the race (^v^) After reached the finish line, the race participant will get a ticket to Saboten park and an onsen ticket! The onsen ticket are different for each race to prevent all of us get crowded in one onsen. I got Yamaki ryokan, so my friends and I went to the ryokan to warm our cold body. Here are the pictures from Yamaki ryokan! We also have delicious ramen for lunch at a little restaurant near the Matsukawa bridge. Yummy!! After specially preparing costume for this race, we do hope to win the best costume award. Too bad, we were at the onsen when the winners are announced. After asking to the staff that are cleaning the area, we were told that the certificate and prize of the winner will be send via pos after 2-3 days.

After waiting, the 4th day, we tought we were lost, maybe someone showed up with better costume? Finally a phone came, informed us that we won the best costume award and they want to confirm my address! The picture below was taken few days after the telephone. I won a certificate as the “best costume” participant! (*•̀ᴗ•́*)و ̑̑ I also get a ticket for a firework event next month. By the way, if you won for the fastest participant, the prize also include some money (around 5,000~30,000 JPY!!!). Recommended for you who are confident with your paddling skill!

Thank you for reading this article. Please come and join the next Tarai Race!! ♥

* Please make sure to check the updated information before your visit.