Hello everyone, do you know that from 13th until 16th August is obon period in Japan. There are many ways to celebrate obon, one of them is tōrō-nagashi or lantern floating. On this article, we will go to see Lantern Floating Festival at Kawaguchi Lake of Mount Fuji.

Tōrō Nagashi Matsuri at Kawaguchi Lake was held since 1981. Japanese believe that the ancestor spirit and people who passed away will come back on obon day. Not only lantern, people will also float offerings to show their respect for the spirit. This is an important part of Japanese culture. A festival to respect the deceased and also a festival where everyone hoping for better future.

Mount Fuji Kawaguchi Lake Lantern Floating Festival is held at Oishi Park (I visited it too in this article about Herb Festival). The reception desk to participate in making lantern opened from 4 p.m. until 7.30 p.m. The admission price to make your lantern is…. free!!! To give a chance for everyone to float the lantern, for family or groups you will be given only one lantern. By the way, even though it is free, you are welcome to give donations to help the festival be better next year. 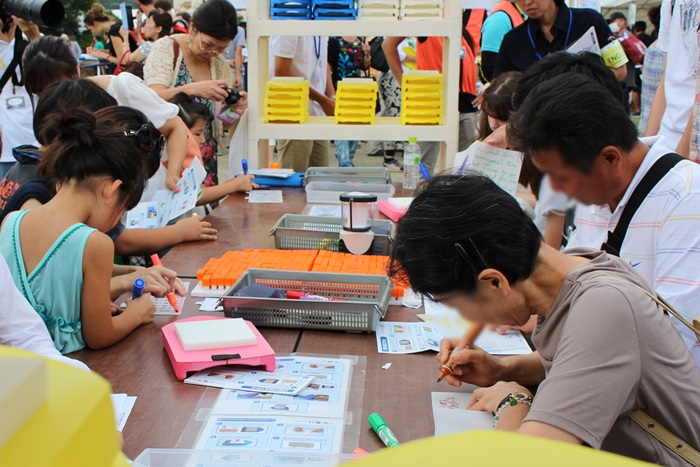 When you register, you will be given an andon or paper to put on the lantern. Everyone gathered around the table, decorating their andon with colorful marker provided. It was very fun! People were not only making prayer or wish, some people also draw beautiful pictures of mount Fuji and tōrō-nagashi event.

Mostly people pray for the deceased family member and write their hope for the health and happiness of their family member and important person. But of course you can just write anything that you want on your lantern, like hoping to win a lottery or hoping for the world peace o(^▽^)o 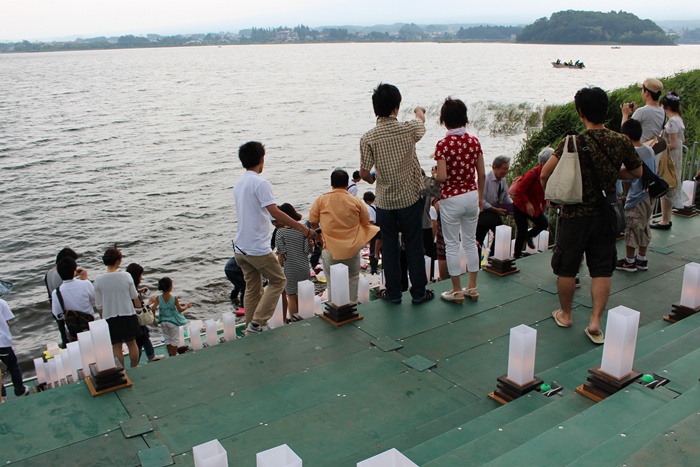 After finished decorating the paper, we took the LED “candle” and sink it a little in the water bucket on the table. Just sink it for 5 seconds and the LED is on! Then set it on the tourou-doudai or lantern base. After put on the andon at lantern base, set a little fin on the back of the lantern and it’s done!

Then, we go to near the lake to float the lantern, praying all the precious wishes written on the lantern could be come true…

Other Event and Performance

For families with little kids, there are family corner. It is a place for little kids to fold origami or draw pictures along with their parents.

Near the family corner is the souvenir shop. I bought some souvenirs and also ice cream! There are 3 flavors available, vanilla, blueberry, or vanilla-blueberry mix. I ate blueberry flavor ice cream, it was delicious! 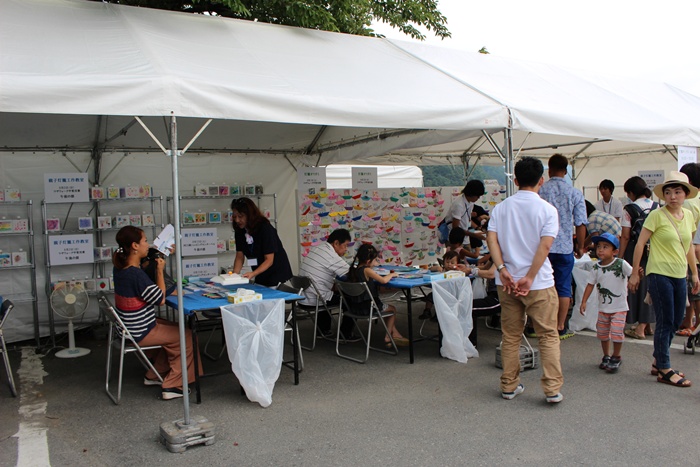 The opening ceremony started from 4:30 pm. It was started by lit a big torch on the stage, and the people who lit the torch float their lantern. When it gets darker around 6:30 pm little boats started came out at the lake. A prayer started and everyone lowered their head in silence and prayed while a group of monk chanting shōmyō (Buddhist prayer by chanting the name of Buddha). The night continues with music orchestra mixed with prayer chanting. There was also an ukiyoe performance by Miyuki Ueda. It was interesting watching her because the canvas was very big, she kept moving while painting and it looked as if she was dancing. After some time working on her ukiyoe, she called 3 kids to the stage to helped her finished the painting. It was a beautiful painting of cute animals bringing lantern to the festival.

I also received postcards after filling a questionnaire. It was also a drawing by Miyuki Ueda. I thought I only received one postcard. But when I got home and checked the postcards, I actually receive 3 different designs! It is so pretty, I like it very much ♥ 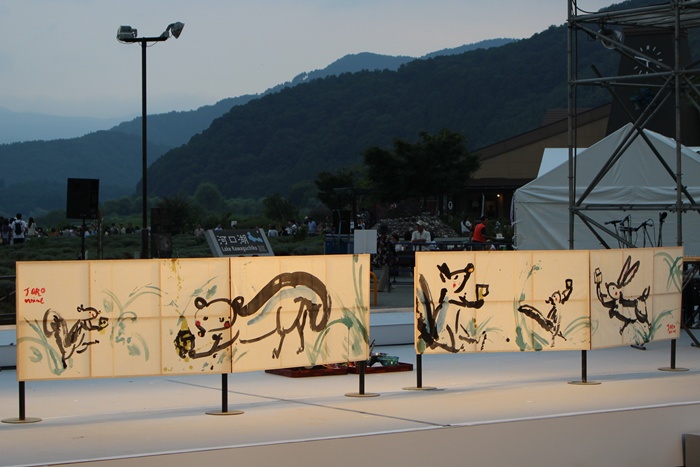 Before going home, once again, we went to make one more lantern (ღ˘⌣˘ღ)

It was dark already and the lantern lighted up very beautiful so I don’t want to miss this chance! And with the last lantern I float into the lake, it finished my journey as an intern in this website.

It was an amazing 4 months writing various articles about travel spots and festivals. I hope all the articles I wrote could give you an idea or will help you planning your trip to Japan. * Please make sure to check the updated information before your visit.