How to Ride a Bus in Japan

For using Japan’s public transport such as bus, subway, etc, bring a reimbursable Suica Card or a Pasmo Card can become very convenient.

IC card (Pasmo or Suica) is very handy which I recommend everyone to have one.

However in some local area of Izu and Hakone, you can not use IC card while traveling, some only accept cashes. 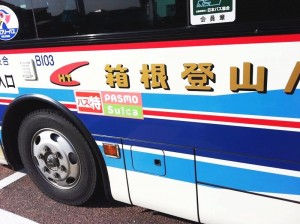 At the station, you can refer to a time table for checking the departure time of a bus.

Numbers showed in column 1 in the time table represent every hour on the hour, column 2 represent minutes. 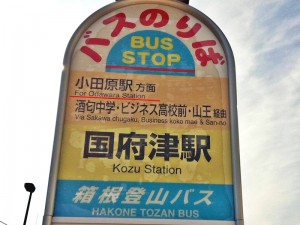 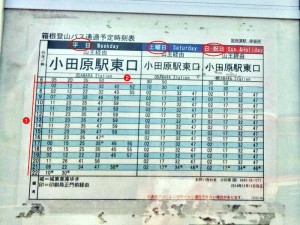 Generally if you are waiting a public bus, you don’t need to weave your hand to make it stop, all you need is to stand in front of the bus top.

When boarding the bus, there is a machine on the bus from which you have to take a boarding ticket. The boarding ticket is used to refer the bus stop you boarded, therefore you can calculate the fares according to the number on the ticket when getting off the bus.

The following shows the boarding ticket (it comes out of the machine automatically) and a card reader to touch your card (there is no need to take a numbered ticket if you use a IC card.) Please do not make phone calls or smoke in the bus.

Buses will give customers full time to get on and off, not to rush people, so don’t stood up from your seat until the bus safely stopped. Priority seats are reserved for handicaps and others with physically inconvenience, in most cases, please avoid sitting on the seats. 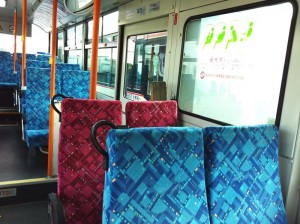 Usually the bus will show information of the stop displayed in the front upper side of the bus, you have to push a button to tell the driver to stop. If you don’t push the button, the bus may go forward without stop. Here is an example of the front display in the bus. You can use it to calculate your fare.

The up most row shows the name of the next stop.

For example, it the number in your boarding ticket is 0, then you have pay 230 yen in order to get off at Inshatsujyo-Mae (The Printing Office). 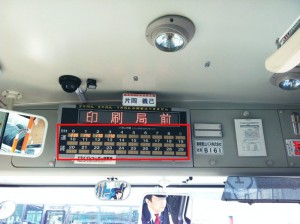 Put the fare along with the boarding ticket into the box of payment.

The payment box is a bit complex, it also works as a money changer. Below shows a payment box. 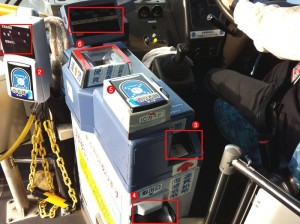 If you have a I.C. Card or you have the exact amount of coins, you can throw the money in directly into the box.

If you don’t have enough coins, you have to put a 1000 yen bill or 500 yen coin into the money changer. The changed coins will come out from the bottom of the machine, you use the coins to pay the fare. (It only serves as a money changer, you can not pay the fare directly from it.)

There are variations in shapes between each bus operators, but the functions are almost same. It generally labeled with Kanji characters. The plastic transparent one is the payment box. Next time you visit Japan, how about a trip by bus?


How to ride a bus